The Masculine Fortress of Solitude –

A simple room that is organized and empty of distracting influences. A Sanctuary. A place to feel at home; welcome in your own company. With protection for, not against. Fortified due to health, not hardness. A place to be alone.

Aloneness takes away [through illumination or exposure of] all that upholds separation. Aloneness is the ground which nothing can take root in. Where the still song of the soul can be heard. When aloneness is experienced and seen for what it is in another human, the very heart of compassion is known. For in every sensation and breath amidst the eternal emptiness and void in another, one cannot help but feel a great and shared sorrow. This awareness of the temporary nature of another attunes an individual to the heart strings of human dignity. Aloneness is the eternal sanctuary afforded to all beings in all realms by the very act of existence.

A key to understanding what the Masculine Fortress of Solitude is, is to not take the word ‘Masculine’ personally, or as if it refers only to a human man. The Masculine Fortress of Solitude is Not just for men. And furthermore, it does not need to be called anything! It is a real event to feel completely and utterly alone. We enter this world alone, with no particular sense and feeling of otherness. We grow into some kind of relationship with the world and in the end, we leave alone. I know… A real cheery view of life. The point is that in the middle part we call our life, we tend to forget the reality of aloneness and play out its shadowy intellectual/emotional reaction of ‘loneliness,’ which we promptly categorize as a negative emotion and enact innumerable strategies to remedy.

Regaining contact with the sensation and feeling of aloneness and emptiness, without the need to ‘fill the void’ is essential to the Divine Masculine experience. This is not a prescription to suffer loneliness unnecessarily. In fact, it is rather the opposite. Being able to relax in the experience of groundless-empty-nothing is a means to build the strength to let go of mental/emotional patterns which keep us entrenched in our psychological script of, “poor lonely me.”

The Masculine creative power is, well… nearly non-existent! While creativity, as such, is more relegated to Feminine energy, what the masculine can add to the creative process is vital attention; very much like the attention a man has when he is newly in love and nearly every thought and feeling moves in the direction of the object of his affection. Masculine attention is generally scattered, pulled in many directions at once, overwhelmed, prone to fantasy, and most often in a state opposite to what is useful to the creative process.

Taking time to be alone, to be in a collected state, to be without demand and constant stimulation promotes creative vitality, whether or not you yourself have a creative endeavor or are wanting to participate more fully in another’s creativity. How much time alone is needed? Enough is enough. Some people need more time than others, and the important thing to remember is ‘why’ you are taking time alone and to not disconnect from relationship in the name of your efforts.

Every masculine person in a relationship knows they are fucking up. If they do not know they are fucking up, they are not listening to the feminine person in the relationship! That said… Masculine energy needs a place to breakdown and become reflective, even remorseful. But! Without the burden of judgement and negative feedback. In this way, the Masculine energy can be freed up to put attention on and support aims of relationship, business, health and wellness, etc.

It is not all a bowl of lotuses though. There are perils of the Masculine Fortress of Solitude.

A Yoga teacher friend asked me a few months ago, “How much of Yoga do you see as avoidance in the name of spiritual practice?” I had to admit that most of my early years of practice were spent using Yoga to avoid something or other which would have been better to look at, like loneliness. *It is important to know that there might be no technique or practice that will rid us of our deeper psychological strategies. And remember, that the observation of a thing changes it! In fact, we might be able to say that observation of a thing is the only real thing that changes anything, especially something as deep as the avoidance of being alone.

As I stated before, the masculine attention is prone to distraction and fantasy. While I do suspect that fantasy is nearly obligatory to thwart global depression, this mode of mental behavior is not particularly aligned with the aims of the Masculine Fortress of Solitude. It’s funny (in a Cohen brothers kind of way) that we can initiate a practice that is designed to show us our self and end up using the practice technology to prevent those very results from happening. Fascination with the technologies and practices which are prescribed as a means to ‘know myself’ affords easy access to the assumption that it has actually happened.

So what does one do in a Masculine Fortress of Solitude?

My God! One does not do anything. A Masculine Fortress of Solitude is a place of ‘un’ doing, or Not doing anything. This is so hard that usually within seconds of attempting it, one finds they are doing all sorts of activities, trivial, entertaining, useful, and otherwise. No problem. Get organized. Get your shit done. So you can have a chance to not do, and just be. 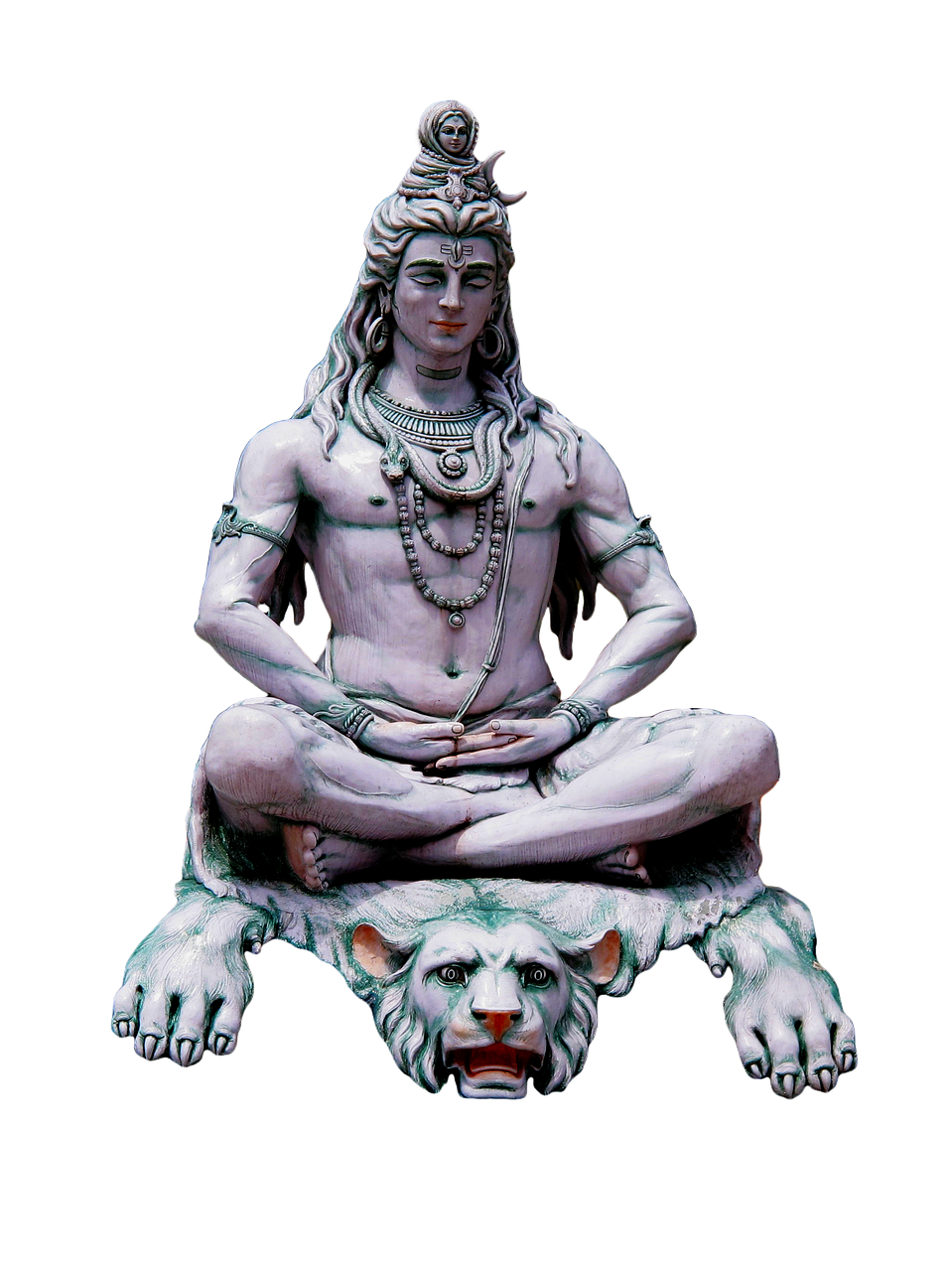 Shiva’s image (in this context) is that of a human male, with pale or blue skin, sitting in solo meditation, on a mountain, with vast sky above and a vista-view out and below, his eyes [of duality] are closed (or mostly closed), and his third eye [of unity] is open and turned inward. Shiva sits in meditation for thousands of years, with no particular participation in the world. Shiva does not feel the need to participate for he exists in constant knowing that any and every being and event in Reality is his very Self. Thus he is content to sit back and witness the unfolding of life without being affected by it.

It’s called Divine Masculine because its is motionless, not because it’s a man!

Though I know some women who would say that their ‘motionless’ husband needs to get up and fix the drippy faucet, or some other unwanted job. It is Masculine because it is passive or motionless relative to the very active Feminine Energy (again, not only a human female). My experience tells me that this energetic dynamic does not taught in Yoga to teach us the way things “should be”, but rather the way things are. What to do and what to be in when we find our selves in this situation, Yoga insists, is up to us.

The presence of the “Void” in Yoga might not be the “nothing” you would expect. It might be so much the opposite that you would never believe it. The “Void” in Yoga comes along with each and every manifestation in Reality. Much like water for fish, and space for planets. The role of the Void in Yoga, depends greatly on the style and viewpoint that one practices under. One way to grock the importance of the Eternal Void is given to us by a theoretical physicist Lawrence Krauss, in his book, “A Universe from Nothing”. He doesn’t intend to support any Yoga mythology, and yet his cosmological framework is starkly aligned. Krauss outlines that ‘empty space’, when void of all energy and matter is not actually ‘empty’ but rather ‘full’ of the creative potential to create the subatomic building blocks of all matter and energy in the Universe! And, that the Universe may come from an even deeper Void, empty even of Space and Time! Whoa! This is, quite frankly, what the Shiva mythology states, and has stated for hundreds if not thousands of years.

The hardest aspect of working with the Divine Masculine narrative and rhetoric is not taking it personally. Try to remember that human imagery is used to impress upon us and teach Divine Realities because we are human! Shiva [in the context of this article] is not concerned with, affected by, or attracted to personal story or identity. Shiva exists in a state of unattached and full knowing of his Self, which is the entire cosmos (both macro and micro), every being and manifestation within the cosmos, and whatever unknown is beyond the cosmos. Shiva views the repeated creation, sustaining, and dissolution of the Universe without getting wrapped up in it.

What pure consciousness is, is not really possible to say in words. So we use imagery.

Among other words to represent Pure Consciousness, Yoga uses the word Chit (or Cit) and posits it as the state of the Knower, the Known, and the act of Knowing all happening simultaneously, with no separation or gap, no agitation, judgement, or reaction. From the perspective of Pure Consciousness, things are what they are, as they are, here and now… And that’s it. So fix that damn leaky faucet already!